In Haiti, Ipso has implemented a socio-cultural and psychosocial project. It was aimed to build sustainable sociocultural and psychosocial capacities enabling the Haitian population to cope better with the aftermath of the earthquake. In Leogane and Jacmel two community-based centers had been established, offering sociocultural activities such as music, dance, theatre, and painting. Additionally, an intergenerational dialogue was initiated and psychosocial services through support groups and individual psychosocial counselling provided. Key elements of these activities were the promotion of social responsibility, inclusion and empathy. The socio-cultural activities encouraged beneficiaries to rebuild their social and cultural identities as well as community integration and communication. Both centers provided easily accessible spaces that allowed beneficiaries of all ages and social backgrounds to meet. 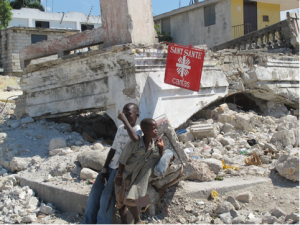 Psychosocial counselling support and services were offered by Haitian psychologists in clinics and centers. Those psychologists had been trained according to Ipso’s counselling approach, which had been adapted to the culture and the specific situation of Haiti in order to assist Haitians with mental health problems to better cope with their difficulties in life.

Although much has been done to improve the Haitian public health system, it does not yet include psychosocial or mental health service support in primary health care. Still, there are far too few facilities that offer help for traumatized people.

The moment it was clear that Caritas had to end the project due to a lack of funding, Ipso has organized a workshop to empower the Haitian Ipso staff in order to continue the work without the Caritas funds and develop small local structures, which would continue the work.

One of our former colleagues has thus founded and officially registered his organisation and Ipso looks forward to working closely with “Paix dans la tête”.